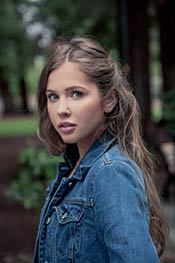 LittleDove F. Rey is a 2018 UCLA graduate who earned a BA in Psychology, with a minor in American Indian Studies. She is Maidu and Miwok from the Auburn Rancheria (United Auburn Indian Community), and currently attends the PGSP-Stanford Psy.D. Consortium, a program run by Palo Alto University and Stanford University School of Medicine, Department of Psychiatry and Behavioral Sciences. Rey is working toward a doctoral degree in Clinical Psychology, having completed her first year in the program, with a long-term goal of working for her tribe in community mental health.

“Mental health care and policy have often overlooked the needs of Native people. Many of the mental health care providers servicing tribal communities are non-Native and place a heavy focus on delivering western, manualized treatment approaches. These approaches fail to account for the inherent knowledge, cultural values, and stories that are unique to each tribal community and are vital for the spiritual, emotional, mental, and physical health of tribal nations. My focus in education is on tribal community mental health, merging traditional values into culturally-based mental health treatment paradigms. Right now more than ever there is a critical need to heal our communities from the disparities that emerged as a result of centuries of colonial violence. I hope to be a small part of the journey towards healing my own community as well as others in Indian country.”

In addition to her passion for tribal community mental health, Rey is committed to her role as an emerging community leader, having worked as a graduate student mentor with the Stanford Native American Cultural Center during the past year in their “frosh fellows” program. She had the opportunity to individually mentor an indigenous (Kānaka Maoli/Native Hawaiian) freshman student through the program, where they worked together to create a research project rooted in traditional kānaka maoli approaches to health care. Most recently, Rey was elected as the 2019—2020 Stanford Native American Graduate Students President.