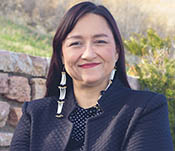 Natalie Stites Means is a UCLA graduate who earned a BA in History, and a minor in American Indian Studies, in 1999. Means, who is Cheyenne River Lakota and Crow Creek Dakota, put herself through community college while working full-time to transfer to UCLA, where she was honored with a Chancellor’s Service Award at the time of her graduation from UCLA. She became the first tribally enrolled Native American to be awarded the Assembly State Fellowship in Sacramento, California. After being appointed by the Governor as a higher education policy advisor for two years following her fellowship, she completed coursework in the Master’s program in American Indian Studies and was awarded a JD with a specialization in Public Interest Law & Policy from the UCLA School of Law in 2007.

After a clerkship with the Ho-Chunk Nation Trial Court, where she worked on child protection, child support and employment relations cases, she returned to her tribal homelands work for the Cheyenne River Sioux and the Rosebud Sioux Tribe. After that, she was tapped to coordinate technical assistance and training for tribal youth and juvenile justice grant programs through the Indian Country Child Trauma Center at the University of Oklahoma. Recently, she ran for Mayor of Rapid City, South Dakota and she continues to consult with clients regarding programs that address violence against women and children, as well as a broad array of problems confronting tribal, urban and non-Native communities.

In 2010, Natalie played a vital role in the emergency response to the Ice Storm incident that caused the energy and water systems of the Cheyenne River reservation to fail for close to three weeks. Working tirelessly, she and others raised over $1 million dollars and brought the storm to the attention of the national media. Natalie’s work for tribal governments led to activist work separate from her professional roles, tying together the need to protect Indigenous women and children from the impacts of notoriously dangerous “man camps,” which accompany dangerous energy development, with protecting families from ongoing domestic and sexual violence in homes and communities. She stood at the Cannonball River against the Dakota Access Pipeline with the Standing Rock and Cheyenne River Sioux Tribes, and continues to stand for the water and mother earth. Social justice is a way of life for Natalie Stites Means.

In her own words, Natalie states, “I feel that I have exemplified a serious commitment to social justice by returning to our tribal homelands, our treaty territories, and by working to improve the conditions facing Native Americans and non-Natives alike. Using the education I was blessed with through two degrees awarded by UCLA, I have worked towards social justice by championing and serving oppressed peoples. As a Lakota woman enrolled with the Cheyenne River Sioux Tribe with ancestral ties to the Oceti Sakowin tribes of the Great Plains and Midwest, who grew up in the City of Commerce, California, I feel that UCLA shaped who I am and how I remain fiercely committed to social justice, fighting against injustice itself.”