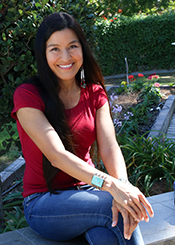 Kimberly Norris Guerrero (Colville, Salish-Kootenai, Cherokee) is a UCLA graduate who earned a BA in History in 1989 and began pursuing a career in acting. Kimberly now serves as Assistant Professor in the Department of Theatre, Film and Digital Production at UC Riverside where her practice-based research centers around righting the misrepresentation and under-representation of Native peoples in mainstream media. Born and raised in Oklahoma, a state dominated by the crimson and cream of OU and the orange and black of OSU, Kimberly grew up with her heart set on something else—the blue and gold of UCLA. Her dream was realized when she was accepted into the freshman class of 1985. Coming from a town so small it could barely fill up one section of the Rose Bowl, Kimberly quickly found a “home” at the American Indian Studies Center, and “family” with librarian Vee Salabiye, professor/mentor Hanay Geiogamah and fellow student Phillip Hale, and others who also viewed AISC as a haven in Campbell Hall. Though Kimberly arrived in Westwood with dreams of being an actress, she realized the lack of Native presence in film or television necessitated having a solid fallback plan—hers would be teaching Native American history.

With guidance from Professor Geiogamah, Kimberly began booking acting roles including in the daytime soap As The World Turns, the ABC mini-series Son of the Morning Star and TNT’s Geronimo, which Geiogamah produced. As if by design, her education in history shaped the respectful and informed way Kimberly prepared—and still prepares—to play Native characters from different nations. With her career on track, Kimberly began championing the sovereign voices of indigenous people in Hollywood, while empowering the future voices of Native America through teaching drama and digital filmmaking to tribal youth.

Today with a long list of acting credentials to her credit (IMDB: https://www.imdb.com/name/nm0635846/), including a memorable turn as Jerry’s Native American girlfriend in Seinfeld, originating the role of “Johnna” in Tracy Lett’s Tony Award-winning August: Osage County on Broadway and playing the iconic Cherokee Chief, Wilma Mankiller, in The Cherokee Word for Water and the upcoming Gloria Steinem biopic, The Glorias, Kimberly continued to advocate for Native voices both on screen and stage, and off. In 2015, discouraged by the shocking lack of opportunity she was seeing for Native America actors, Kimberly returned to school to garner an MFA in Screenwriting from UC Riverside. Dedicating herself to writing TV series centered around Native storylines, two of Kimberly’s projects Chasing Arrows and Indian Country (developed with Wilma Mankiller’s husband, Charlie Soap) garnered finalist spots in prestigious screenwriting competitions, and she currently has another series in development with a major streaming platform.

“Like so many others, I grew up seeing UCLA not simply as an institution of higher learning, it was an ideal, a way of knowing and interacting with the world that was personified by folks like Jackie Robinson, Carol Burnett and John Wooden. And yes, for this smalltown, football-loving girl from Oklahoma, those fearsomely wondrous ceatures known as the UCLA Song Girls whose ranks I longed to join one day. It was like there was this beacon emanating from some ethereal place between Royce and Powell whispering to my soul: dream big, work hard, don’t give up. That message still resonates within me, and I’m doing the very best I can to answer it.”