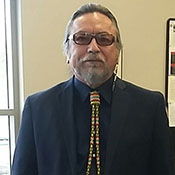 Eugene Herrod (Muscogee Creek) is a UCLA graduate who earned a BA in Anthropology in 1977 and currently teaches at College of the Muscogee Nation. He teaches Native students about land issues, gaming law, and Muscogee and Native American history and culture. Eugene was born and raised in Oklahoma and received his education through the Bureau of Indian Affairs school programs, after which he moved to Los Angeles as part of the US Indian Relocation program. There, he later enrolled at UCLA. During the early 1970s Native people nationwide were rising up against oppressive government practices such as with the occupation of Alcatraz and Wounded Knee. Inspired by his early exposure to these forms of activism, he started organizing other Natives in Southern California. As a lead protesting the use of Indian mascots in California public schools, he and a few Native students at UCLA advocated for legislation that would remove “Redskins” as a mascot within public schools. He also worked with advocates for American Indian children on filing a legal complaint against the Department of Motor Vehicles (DMV) to eliminate personalized license plates that read “Redskins.” After graduating, Eugene served as a private investigator for 27 years, which not only included addressing Indian injustices, but also working on the MGM fire, the OJ Simpson case, and the tobacco and trial cases during the 1980s.

After retiring, he moved to Oklahoma where he is currently teaching at his tribal college, College of the Muscogee Nation. Eugene also holds a master’s degree in sociology from Fort Hayes State, and a master’s of jurisprudence in Indian law from Tulsa Law school.

Last month, Eugene was voted Faculty Member of the Year by students and faculty at College of the Muscogee Nation.