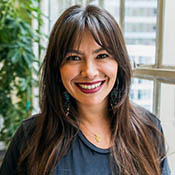 Temryss Xeli’tia Lane is from the Golden Eagle Clan of Lummi Nation, a Coast Salish tribe in Washington State. Temryss is the Director of the Indian Country Team at Pyramid Communications, a Seattle-based public relations and strategic communications firm that supports tribes and tribal organizations in telling their stories and generating visibility for Indigenous leadership. She holds a Master’s degree in American Indian Studies from UCLA, is a Nike N7 Ambassador, and is on the board for the Chief Seattle Club.

As a defender, Temryss played soccer professionally, semi-professionally, and collegiately for the likes of Balinge IF (Damallsvenskan, Uppsala, Sweden), Ajax of America, California Storm, Arizona State University, and briefly for the U23 US national team. Her experience brought her on global adventures in North America, Central America, South America, Africa, the Caribbean, and the Pacific Islands. Playing led to a career in sports broadcasting, as a journalist and analyst for the likes of Fox Soccer, Fox Sports, Bein Sports, MLS and Pac-12 Networks.

A self acknowledged “student of the body”, Temryss frequently speaks on culturally-specific solutions that address challenges to wellness within the Indigenous Community

“The higher education journey I took as a Native Bruin set me on a path of growth, empathy and leadership that has propelled me into the next season of my life. Following a life in professional sports and media, academia—the guidance of the professors, advisors, and fellow Native graduate students—helped me situate myself as a Lummi woman with an expanded worldview and commitment to social justice and Indigenous sovereignty. I’ve since returned home to the Salish Sea to be closer to my family and tribe, Lummi Nation. My grandparents would always tell me to go out into the world, learn as much as you can, then come back here and tell us what you’ve learned. Now, in integrating myself as a student of the body, travelled footballer-defender, and scholar, I’ve evolved my practice into communications strategy, supporting land-based defense and tribal leadership to amplify Indigenous visibility. Next to my ancestors, I credit my UCLA Native Bruin journey for steering me home.”