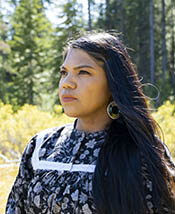 This July issue marks both the first of our renamed “Native Bruin Highlight” series and a continuation of the 50th-anniversary monthly spotlight on our alumni. Our 50th anniversary year ended June 30th, but the feature proved to be highly popular and so we are continuing it. This month we are highlighting Native Bruin Stephanie Mushrush.

Stephanie Mushrush, LCSW, is a member of the Washoe Tribe of Nevada and California, and is also Filipina. Stephanie earned her Master of Social Welfare at UCLA in 2013 as an Indian Health Service Health Professions Scholar. She currently works as a psychiatric social worker at the American Indian Counseling Center for the Los Angeles County Department of Mental Health. Her mental health work takes Native cultures, traditions, and historical and intergenerational trauma into consideration to aid in supporting the healing and resiliency of individuals, families and communities. Stephanie spent the past year working as a mental health therapist for the Washoe Tribal Healing Center in Gardnerville, NV, and says that it was an invaluable experience. She hopes other Native people will seek out similar work, serving their own tribal communities and spending time learning in their homelands. She also previously worked at Sherman Indian High School as dorm staff and is chair of the Many Winters Gathering of Elders, a four-day ceremony where Native elders share teachings with the Southern California/Los Angeles community. She is also a music artist under the name of 𝑆𝑎𝑙𝑙𝑒𝑒 𝐹𝑟𝑒𝑒, whose music reflects her resilience through expressing her cultural identity.

Regarding her time at UCLA, Stephanie writes:
“UCLA was a special time in my life. Although I went to graduate school later than some—it was still a huge, scary, life-changing decision—one that continues to bless me today. I hope every BIPoC person out there hears and follows their calling: for some, it’s to higher education, for some, it may look a little different, but is equally powerful. Know that it’s never too late, you are not alone, and you belong. Seek out help and support. Trust—Creator will unfold your path before you.”