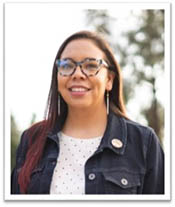 This November we are highlighting Native Bruin Clementine Bordeaux from the Sicangu Lakóta Oyáte tribe.

Clementine Bordeaux is an enrolled member of the Sicangu Lakóta Oyáte and was raised on the Pine Ridge Reservation. She is the youngest daughter of Christopher and Deborah Bordeaux. She comes from a long line of educators, with her maternal grandmother, mother, father and sister all receiving a master’s degree.

Clementine received a master’s degree (2011) from the University of Washington, Seattle, through the Native Voices Indigenous documentary film program and an undergraduate degree (2006) in theatre from Carthage College. From 2011 to 2017 she worked as the Academic Coordinator for the American Indian Studies Interdepartmental program at the University of California, Los Angeles. As the Academic Coordinator, Clementine started an annual research symposium for the program and supported the founding of a Native staff association at UCLA. Her work at UCLA brought her into the Los Angeles County community, which eventually led to a mayoral appointment as a commissioner for the Native American Indian Commission for the County and City of Los Angeles (2018–2019).

Currently, she is a PhD student in the World Arts and Cultures/Dance department at UCLA. In Clementine’s free time, she sits on the board for Cornerstone Theater Company (Los Angeles) and is a collaborator for the Racing Magpie arts consulting organization in South Dakota. Her current research engages Lakota ontology, Indigenous feminisms, Indigenous representation, visual anthropology, digital/new media, and community-based participatory research.

“Being a Native Bruin has taught me that you have to go beyond the confines of campus and accept the challenges and limitations of being a Kuuyam (guest). The Native community at UCLA has reminded me to ask myself (before I complain) ‘have I volunteered yet?’ And without Tongva, Tataviam, urban, and local voices, UCLA would not be a place to call home.”