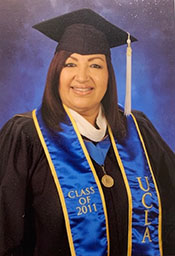 Elizabeth FastHorse. Is a tribal member from the Rincon Band of Luiseño Indians. She grew up on the Rincon Indian Reservation with her grandmother and two siblings.

Elizabeth’s educational journey began at the mission school on the Pala Indian Reservation and then eventually she attended St. Katherine’s Indian Boarding School in Santa Fe, New Mexico for her high school years. Her time at St. Katherine’s was cut short due to her grandmother passed away and she had to move to Los Angeles to live with her mother and the rest of her siblings. Elizabeth later graduated from Bell High School and went to college for a few years but eventually stopped. She returned to college in 2004 at Rio Hondo Community College and graduated an honors student in 2008.

Elizabeth was accepted to UCLA the same year and earned a bachelor’s degree in 2011 in American Indian Studies (AIS) and then a master’s in American Indian Studies in 2014. She applied for another graduate program at UCLA in Education and earned her second master’s degree in Social Research Methodology in 2018. In the same year she was accepted into the Social Sciences and Comparative Education Doctoral program and is currently a fifth year PhD student. Elizabeth never dreamed she would attend graduate school, much less earn a PhD. Her dissertation work will focus on theÂ LuiseÃ±oÂ youth from Rincon who participate in the Rincon Youth Storytellers and how they share their knowledge of language and culture in their contemporary lives. 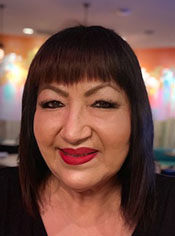 “One thing I can honestly say is, “don’t give upâ€”it does not matter your age because we never stop learning!” My time at UCLA has given me courage, tenacity, focus, vision and the knowledge that I do belong at UCLA. I am grateful for support from my peers, my professors, and staff in the American Indian Studies Center and those in the AIS-IDP program who believed in me and gave me encouragement to keep going forward. Go Native Bruins!”